Log in Register for free Suggest a product
DE | EN

Or propose new ones

Propose
devicebase is the most advanced database for connected products

We help you manage your devices!

Improved Line Key Assignments
• After the line key assignment feature is enabled, the default category of a line key is now Any instead of Unassigned. As a result, speed dialing and other end-user-defined keys appear even if they aren't managed explicitly by the configuration file.

License File Import from the Web System Interface
• License files can now be imported from the phone's web UI in the same way a configuration file may be imported.

Web UI Security
• HTTPSecurecookie attribute is now in use.

Minimized Reboot Parameters for Hotdesking
• To improve the speed of hotdesking, this release removes the reboot requirement for several configuration parameters. You can now adjust the following parameters without requiring the phone to reboot:

Persistent Redial Button
• The Redial button and menu ions now remain present after rebooting rather than
appearing only after someone makes a call.

More updates To the product

Sign up and follow Poly Trio C60 now. We will inform you about new updates by e-mail. 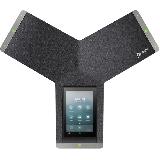 A conference IP phone with a multitouch display ideal for large rooms.
To the product

ICE, STUN, and TURN Support Along With Fixes And Improved Network Subnet

• This release includes all the features and important fixes from earlier 7.3.x releases as well as:

devicebase helps you to keep track of information about devices you manage.